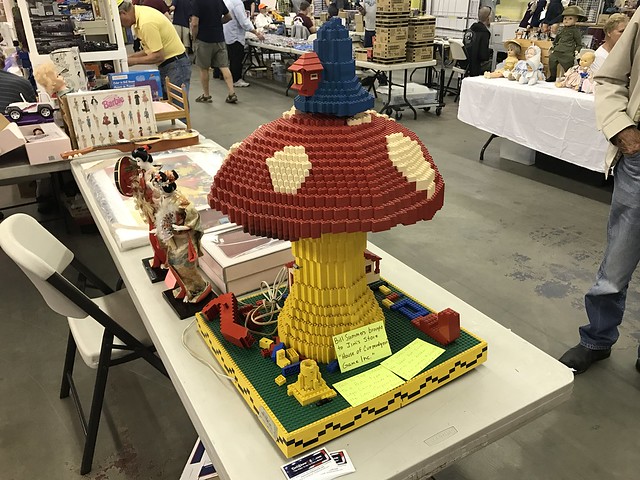 Toys, Toys, and more Toys – but barely a LEGO in sight.

My wife and I had the pleasure of attending the 29th Annual Tucson Collectible Toy Show and Sale today in Tucson, Az; and while we had a great time visiting with friends, fellow attendees and vendors, the show definitely was not the ‘in scene’ for LEGO fans.

It is important to note that this toy show and sale is presented by the Tucson Miniature Auto Club, whose primary focus is the collecting and enjoyment of die-cast autos, so it is only natural that their annual toy show and sale be dominated by die-cast cars of all shapes, sizes and varieties. And since my wife is an avid fan and collector of all things Catwoman’ly and I collect die-cast cars along with being a LEGO fan, we found more than enough vendors with items on display for us to admire and to buy. It wasn’t all doom and gloom though, I did pickup a small assortment of LEGO minifigs at a good price along with some Hot Wheels, Johnny Lightnings and Matchbox cars.

This annual, one-day toy show and sale, is billed at the largest toy show in the Southwest, with 500 vendors tables covering a wide range of collectibles; from toy cars, comics, action figures, video games and even a few LEGO here and there; and is worth the trip if you are into collecting more than LEGO. Personally, I also like the fact that it is not a killer multi-day, marathon event that takes up a whole weekend – it’s a once-a-year, one-and-done event which is nice.

I did see one unique LEGO item of special interest as you can see in the featured image at the top of this post and below.

It’s billed as “The shade to a prototype LEGO lamp made by LEGO”; however I have no idea what it is 😛