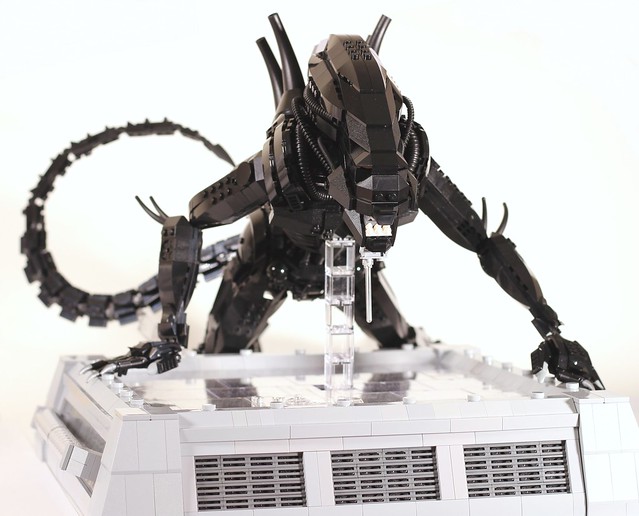 It was sometime in 1979, while watching the original Alien film, that I developed a life-long crush on actress Sigourney Weaver, and a fascination for Xenomorphs.

I’ve seen every movie, even the bad ones, multiple times, and have been known to pickup Alien themed merchandise on a whim, wth my latest random Alien themed acquisition being the Mega Construx Kubros Alien kit. A kit still waiting patiently on my shelf to be assembled by the way – but no matter how cool that kit may be, it pales in comparison to this custom LEGO creation posted on Flickr by Missing Brick, of the Xenomorph from the upcoming Alien: Covenant film, and I was stunned at how well it captures that ‘feeling’ you get when you see an Alien. The, I’m so scared I think I just wet myself, feeling – the feeling that I got the over 100 times I was killed by the Alien in the Alien: Isolation game…yes, I proudly proclaim that I have the 100 Times Too Many achievement! Yeah, ME!

I can only hope that this latest entry into the Alien franchise, like the custom LEGO Xenomorph MOC pictured in the photo above, gives me that feeling again…

Custom Alien: Covenant LEGO model by The Arvo Brothers, with some posing mods by Missing Brick, built from instructions in the ‘Alien Project’ book.

…also, for an entertaining take on the Alien: Isolation game, head over to the YouTube channel PlayStation Access for Rob’s take on the game.

My Sigrouney Weaver ‘crush’ though, that’s a another story, for another time. 🙂